Skip to content
Last update 23 November, 2016
Jai Courtney featured in this month’s issue of Men’s Style Australia, photography by Lorenzo Agius and published on the 15th of August, 2016.  “In a very honest appraisal, the now LA-based actor tells Men’s Style about how he has dealt with appearing in some less-than-wonderful films in recent years and now come out the other side”.

❝When I did Die Hard a producer told me, ‘When this comes out it’ll change your life forever’. But it’s not like the phone started ringing that day and that’s because of a whole lot of things. There are no regrets at all, but I was a little young and a little more naive and I played into that for a second.

Sure, Suicide Squad will change things. The film’s fantastic and I’m certainly the most excited I’ve been about something to date. But I’ve also been around long enough to learn the value of not anticipating things too much. I’ve felt pretty good about [films] I’ve worked on before but you can’t predict how things are going to go❞. 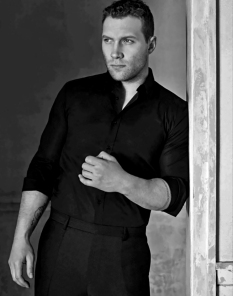 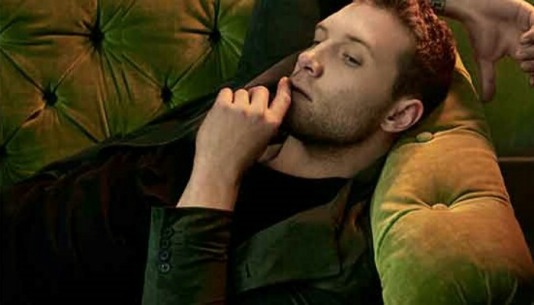 See all Articles at Apanache on Jai Courtney

See more images of the Haute Living shoot at Apanache

ZEN AND THE ACCELERATION OF

Jai Courtney wins GQ’s Actor of the Year Award at the prestigious event held at The Ivy in Sydney, Australia. 12th Nov, 2015

Becoming more popular in Hollywood, has seen Jai being snapped up for some diverse roles of late, for example starring in The Kaiser’s Last Kiss with Lily James. With his international success in being recognized as the bright new star in films & he’s been busy with other movies such as Suicide Squad alongside Will Smith, Jared Leto, Margot Robbie & Cara Delvingne. See the link above for more on Jai’s Movie roles, or here for his Filmography.

Courtney took the stage at the GQ’s Men of the Year Event at which he was awarded Actor of the Year. The ceremony honoured men – and women – from all industries, such as sports, cinema, fashion and music; it celebrates their achievements and their continued efforts to better themselves at what they do.

“Achieving greatness all while remaining true gentlemen is what makes all of our winners truly extraordinary and worthy of their GQ trophies.” 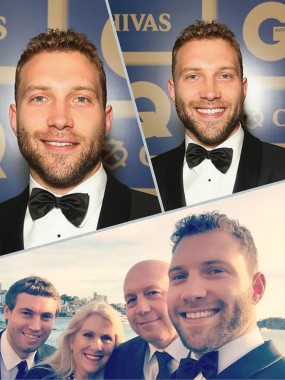 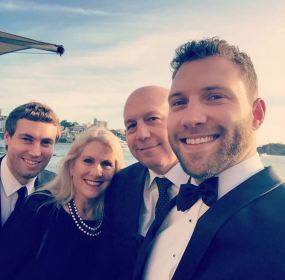 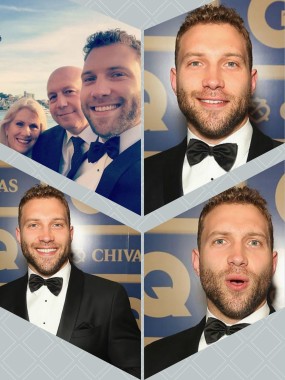 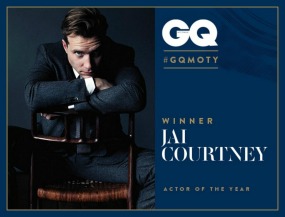 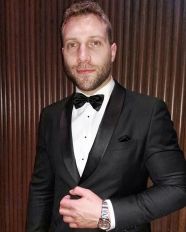 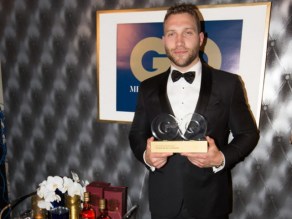 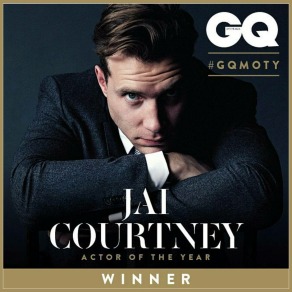 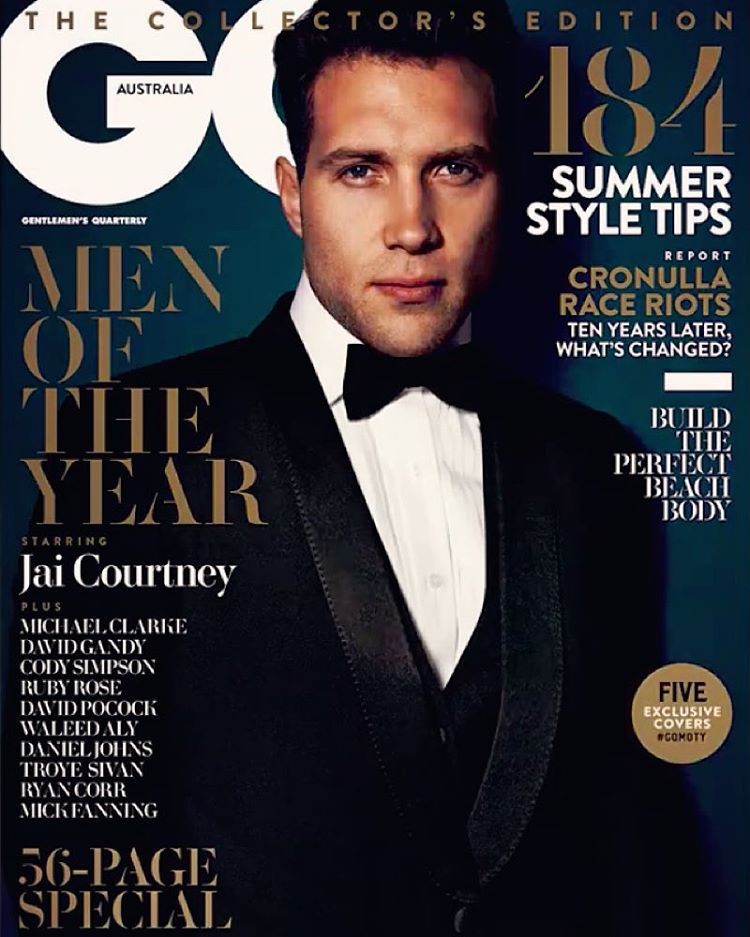 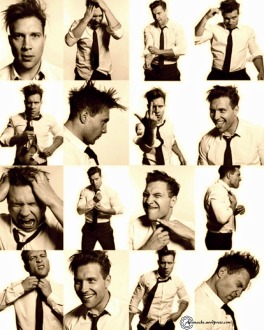 Or His Movie Updates

Following are the Getty Images from the red carpet, photographer: Don Arnold (& Brendon Thorne for the last 2 images)

Is This Fortune-Free Paper Stock?

When I meet Jai Courtney he is slouching on a couch in a small back room at Smashbox Studios in Los Angeles. He is wearing a flannel and sneakers, but his hair is precision-parted and lacquered like Clark Gable’s. He flagrantly smokes his rolled cigarettes indoors. “It started out kind of industrial,” he says, of his Flaunt photoshoot. “And then shit got dapper.”

Courtney’s shit is about to get permanently dapper, judging by the current trajectory of his career. The 27-year-old Australian actor has already played Tom Cruise’s antagonist and Bruce Willis’ son (in Jack Reacher and A Good Day to Die Hard, respectively), and he has at least four high- profile film projects on deck for 2014, including the fantasy-action movie I, Frankenstein and the adaptation of the bestselling young-adult science-fiction series Divergent. He has also proven appealing to A-list actors directing large-scale period dramas; he’ll be in Angelina Jolie’s Unbroken and Russell Crowe’s The Water Diviner this year.

Courtney is truly poised on a brink—his future seems full of excitement and uncertainty, in a “you’ve got to wear shades” sort of way. To peer beyond the unknowns and glimpse his fate, I resort to schoolyard clairvoyance: I play MASH with Jai Courtney.

MASH is a game traditionally played by elementary school kids with paper and pencil. One player compiles a list of four grown up potentialities in several categories—their possible jobs, pets, spouses. A number is arbitrarily determined, and players count down the lists, crossing off each item that corresponds with that pre-determined number until only one possibility is left in each list. I’m worried that Australian children do not play MASH, but luckily Courtney is familiar with the game, and, more importantly, down to discover his future. “Let’s do it,” he says, “Let’s play MASH.”

Careers
1. Actor [I guess it’s no surprise that this is what Courtney wants to be when he grows up.]
2. Fireman [Courtney tried to get in the MASH spirit and channel his inner grade schooler with this answer. And even more with the next one.]
3. Tiger [“You know, as a kid, I always wanted to be a tiger.”]
4. Musician [I ask Courtney what he would like to do now if he weren’t an actor. “I play music,” he says. “But I’d never have the talent to do it professionally.”]

Courtney has played a lot of tough guys and soldiers—he was a gladiator in the STARZ series Spartacus: Blood and Sand, an assassin run amok in Jack Reacher, and the leader of the gargoyle army in I, Frankenstein.

As such, he’s learned to accept some level of typecasting. “I think there’s wisdom in playing to your strengths. When you’re starting out, there’s a lot of idealism. It’s like, ‘I could play a scientist,’” he says, putting on his best bright-eyed and bushy-tailed face.

But now that Courtney’s star is rising, he’s trying to find a balance between playing to his action-dude type and showing more sides of his personality and talent. He has good role models in Willis, Cruise, and Crowe, all of whom are legitimate action stars who have branched way out. “I definitely look to those guys for their longevity,” Courtney said. “I want to be doing this for a long, long time.”

Talking to Courtney, I am struck by how open, smart, and down-to- earth he is—he comes across as so normal. “Choosing between roles is a privilege I’ve never really had before,” he says, speaking as an actor who is genuinely surprised by his fortune. He’s realistic about his career—and his “type,” and the luck he’s had—that it seems unlikely that his star will fizzle out in some hubristic flash. He’ll soldier on.

Pets
1. Dog [Courtney: “I have dogs now. I will always have dogs.” Later, when I read his fortune and tell him he will not be owning a dog, he is defiant. “We’ll see about that.”]
2. Macaw [Despite his practical first answer, Courtney’s dream pets tend toward the exotic.]
3. Snake
4. Tiger [Me: “So you could be a tiger who owns a tiger?” Courtney is unfazed by the possibility.]

When the travel slows and Courtney returns to Australia, he’s like a kid coming home from college. “I’m definitely depending on other people. I don’t have a place there,” he says. “I don’t have a vehicle.” But his roots in Sydney are very strong. “Me and my high school mates are so close. We’re like brothers.”

Courtney has been lucky in his recent projects to get to work in Australia—both Jolie’s Unbroken and Crowe’s The Water Diviner are filming there. “I’ve always admired [Crowe] as an actor,” Courtney says. “I’m excited to see him in the director’s seat. He’s definitely smart, and he has an understanding of story.”

Crowe is one of Australia’s most brilliant and successful exports to the American movie machine, and The Water Diviner is what Courtney calls “an Australian story.” This is an interesting progression in his own career—it might be his chance not only to work with Crowe, but also to branch out from Hollywood and contribute to
a true Australian cinema.

1. Sarah Palin [To raise the stakes, Courtney lists the worst possible outcome.]
2. Beyoncé [I had suggested Rihanna. “She’s hot. But let’s do Beyoncé.”]
3. April from the Teenage Mutant Ninja Turtles [I suggested a fictional character from our late-ʼ80s childhoods—maybe Jem? Courtney instantly vetoed that idea. “Gem is my ex-girlfriend’s name,” he says sheepishly. Presumably he meant Australian actress Gemma Pranita, who he dated for eight years. We settle on the Ninja Turtles’ friend April, whose name holds no complicated personal associations for Courtney.]
4. Kate Upton [Me: “A model?” Courtney: “I’m not really up on the current models.” Me: “Kate Upton?” Courtney: “Yeah. She’s hot.” Easy enough.]

In Divergent, Courtney plays Eric, the hard-ass leader of the societal “faction” that the main character, Tris Prior, is joining. “I was a bit reluctant to do a character who’s back in that macho zone,” Courtney says of his only kid-friendly project to date. “But it is a brilliant story centered on a great young, strong, female character, which I don’t think we see enough of these days.”

It’s hard to overlook how far removed this conversation about the young adult film franchise is from Courtney’s own youth in Sydney, studying acting at the prestigious Western Australian Academy of Performing Arts. “There are certain theaters in Sydney that I used to look at and think, if you acted on that stage, you’d made it.” Courtney is and has been focused on his future success, but he no longer has to be now that we’ve determined his destiny: to be a tiger who is married to April from the Ninja Turtles, living in an apartment in London with zero children and a snake for a pet.