Here’s a link to all my posts in the Category of Astrology for ease of reference.

The following is an Article via Wikipedia

Western Astrology is the system of astrology most popular in Western countries. Western astrology is historically based on Ptolemy‘s Tetrabiblos (2nd century AD), which in turn was a continuation of Hellenistic and ultimately Babylonian traditions.

Western astrology is largely horoscopic, that is, it is a form of divination based on the construction of a horoscope for an exact moment, such as a person’s birth, in which various cosmic bodies are said to have an influence. Astrology in western popular culture is often reduced to sun sign astrology, which considers only the individual’s date of birth (i.e. the “position of the Sun” at that date).

Because astrology has failed in predictions when under scientific tests, it is generally regarded as pseudoscientific.

A central principle of astrology is integration within the cosmos. The individual, Earth, and its environment are viewed as a single organism, all parts of which are correlated with each other.[1] Cycles of change that are observed in the heavens are therefore reflective (not causative) of similar cycles of change observed on earth and within the individual.[2] This relationship is expressed in the Hermetic maxim “as above, so below; as below, so above”, which postulates symmetry between the individual as a microcosm and the celestial environment as a macrocosm.[3] At the heart of astrology is the metaphysical principle that mathematical relationships express qualities or ‘tones’ of energy which manifest in numbers, visual angles, shapes and sounds – all connected within a pattern of proportion. Pythagoras first identified that the pitch of a musical note is in proportion to the length of the string that produces it, and that intervals between harmonious sound frequencies form simple numerical ratios.[4] In a theory known as the Harmony of the Spheres, Pythagoras proposed that the Sun, Moon and planets all emit their own unique hum based on their orbital revolution,[5] and that the quality of life on Earth reflects the tenor of celestial sounds which are physically imperceptible to the human ear.[3] Subsequently, Plato described astronomy and music as “twinned” studies of sensual recognition: astronomy for the eyes, music for the ears, and both requiring knowledge of numerical proportions.[6]

Later philosophers retained the close association between astronomy, optics, music and astrology, including Ptolemy, who wrote influential texts on all these topics.[7] Al-Kindi, in the 9th century, developed Ptolemy’s ideas in De Aspectibus which explores many points of relevance to astrology and the use of planetary aspects.[8] 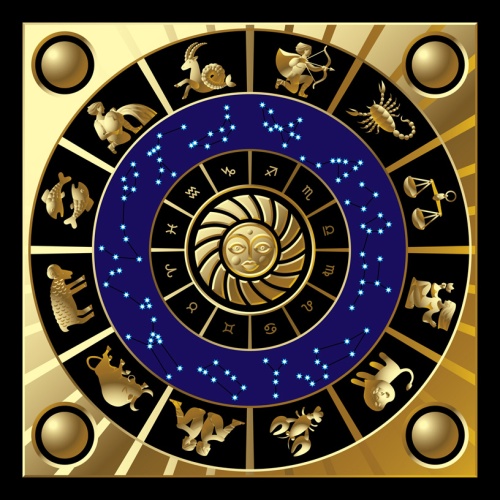 Zodiac sign for an individual depends on the placement of planets and the ascendant in that sign. If a person has nothing placed in a particular sign, that sign will play no active role in their personality. On the other hand a person with, for example, both the sun and moon in Cancer, will strongly display the characteristics of that sign in their make up.