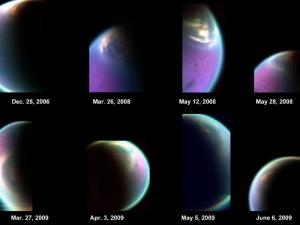 Saturn’s moon Titan shifts with the seasons and even throughout the day. The papers, published in the journal Planetary and Space Science in a special issue titled “Titan through Time,” show how this largest moon of Saturn is a cousin — though a very peculiar cousin — of Earth.

Read the full story at Science Daily: The Many Moods of Titan.

Saturn’s Titan has been considered a “unique world in the solar system” since 1908 when, the Spanish astronomer, José Comas y Solá, discovered that it had an atmosphere, something non-existent on other moons. It seems perfectly appropriate that one of the prime candidates for life in our solar system, Saturn’s largest moon, Titan, should have surface lakes, lightning, shorelines, relatively thick nitrogen atmosphere -and seasons. And thanks to new Cassini data pointing to an ocean, it just become more so.

Data from NASA’s Cassini spacecraft have revealed (this story from 2012) Saturn’s moon Titan likely harbors a layer of liquid water under its ice shell.  Researchers saw a large amount of squeezing and stretching as the moon orbited Saturn. The Cassini team deduced that if Titan were composed entirely of stiff rock, the gravitational attraction of Saturn would cause bulges, or solid “tides,” on the moon only 3 feet (1 meter) in height. Spacecraft data show Saturn creates solid tides approximately 30 feet (10 meters) in height, which suggests Titan is not made entirely of solid rocky material.

Full Story at >> The Daily Galaxy