Astronomy Picture of the Day

Explanation: Where did all the stars go? What used to be considered a hole in the sky is now known to astronomers as a dark molecular cloud. Here, a high concentration of dust and molecular gas absorb practically all the visible light emitted from background stars. The eerily dark surroundings help make the interiors ofmolecular clouds some of the coldest and most isolated places in the universe. One of the most notable of these dark absorption nebulae is a cloud toward the constellation Ophiuchus known as Barnard 68, pictured above. That no stars are visible in the center indicates that Barnard 68 is relatively nearby, with measurements placing it about 500 light-years away and half a light-year across. It is not known exactly how molecular clouds like Barnard 68 form, but it is known that these clouds are themselves likely places for new stars to form. In fact, Barnard 68 itself has been found likely to collapse and form a new star system. It is possible to look right through the cloud in infrared light.

The following excerpt; by  Jaime at From Quarks to Quasars
“Contrary to your first instinct upon viewing, this is not a black hole. Not in the conventional sense anyway. It isn’t sucking in matter that comes too close to it. Instead, this is a dark absorption nebula that’s located about 500 light-years away in the constellation Ophiuchus, known as Barnard 68, which is believed to be about half a light-year in length. Since all of the light from the background stars is being obstructed, astronomers can accurately determine that the cloud is close in distance (cosmically speaking, of course!) to us.”

If one wanted to take a peak through the cloud to see it on a different wavelength, this is how it looks in infrared:
The Blaze
Read more about Barnard 68 here:
European Southern Observatory

A Breeze from the Stars ~ 13th constellation Ophiuchus: that History forgot… (via NASA)

I came across this interesting article via science at NASA, only to realize that I have really not been keeping ‘up to date’ with their website for over a decade, and has a surprising amount of intriguing information, enjoy..

December 17, 2004: Every year in early December, something happens that can throw your horoscope out of whack. The sun enters Ophiuchus, the little-known 13th house of the zodiac.

You’ve probably heard of Capricorn, Aquarius, Pisces, Aries, Taurus, Gemini, Cancer, Leo, Virgo, Libra, Scorpio and Sagittarius. The sun passes through these constellations, one by one, throughout the year. They’re the ancient signs of the zodiac.

Modern astronomers don’t divide the sky the same way ancient astronomers did. According to modern star maps, the sun cuts through a 13th constellation, Ophiuchus the Serpent Bearer, between Nov. 30th and Dec. 17th. Astrologically speaking, if you were born between those dates you’re no longer a Sagittarian, you’re an Ophiuchi! But that’s another story….

This story is about what really happens when the sun enters the zodiac’s 13th house: An interstellar wind hits our planet.

It’s a helium-rich breeze from the stars, flowing into the solar system from the direction of Ophiuchus. The sun’s gravity focuses the material into a cone and Earth passes through it during the first weeks of December. We’re inside the cone now.

“There’s no danger to anyone on Earth,” says space physicist George Gloeckler of the University of Maryland. “The helium breeze is a thousand billion billion times (1021 times) less dense than Earth’s atmosphere. It cannot penetrate to the surface of our planet.”

Nevertheless, astronomers are keen to study it.

The breeze is a telltale sign of what lies outside the solar system. Interstellar space, the “void” between the stars, is not empty. It’s filled with gigantic clouds of gas and dust. These clouds are the birthplace of stars and planets; they’re also the debris left behind when stars explode. The solar system is running into one. Astronomers call it the Local Interstellar Cloud. The sun’s magnetic field holds much of the cloud at bay, but some of the cloud’s gas does penetrate—hence the breeze.

Above: The Sun’s gravity deflects the interstellar helium breeze and causes it to pile up downstream from the sun. This concentration is helpful to spacecraft observing the wispy-thin flow. Credit: American Scientist. [More]

NASA’s ACE (Advanced Composition Explorer) spacecraft, located at the first Lagrange point directly between Earth and the Sun, is perfectly situated to study this breeze. “When Earth moves through the focusing cone (the region of space where the sun’s gravity focuses the breeze), so does ACE,” explains Gloeckler, who is one of ACE’s Lead Co-investigators. “We’ve been through the cone seven times–once a year since the spacecraft was launched in 1997.” 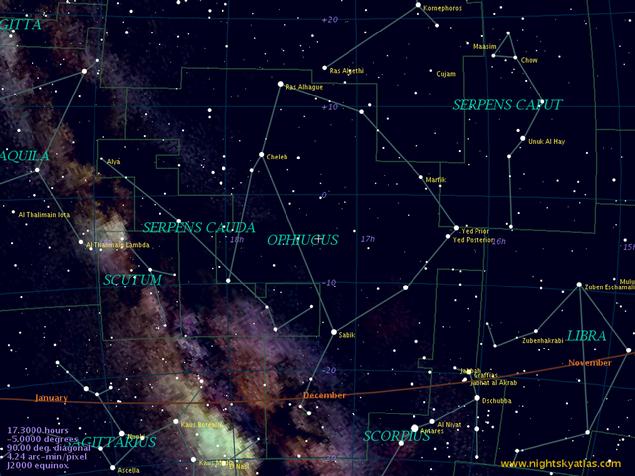 ACE’s mission is to study the solar wind, the hot breeze from our own star, so the spacecraft is well equipped to study the interstellar breeze, too. An instrument onboard ACE called SWICS detects helium ions in the breeze, measuring their density, temperature and direction of flow. Using these measurements, along with data from other spacecraft (chiefly SOHO and Ulysses), Gloeckler and colleagues have calculated the properties of the Local Interstellar Cloud.

An artist’s concept of the Local Interstellar Cloud. [More]

One day the solar system might run into something more massive. There are clouds in the galaxy thousands of times denser than the Local Interstellar Cloud. University of Chicago astronomer Priscilla Frisch has studied what might happen if we plowed into one of those. Writing in the magazine American Scientist she reports, “a cloud with 1,000 atoms per cubic centimeter could compress the sun’s magnetic field to within a few AU of the sun. (1 AU or “one astronomical unit” is the distance between the sun and Earth). Planets such as Saturn, Uranus, Neptune and Pluto would be fully exposed to interstellar atoms and molecules. Interstellar gas would overwhelm the solar wind at 1 AU,” transforming the space-environment of our planet.

The first signs of such a transformation could be the helium breeze thickening or shifting directions, heralding something new to come.

ACE has already detected changes. “We see strange gusts, ebbs and flows,” says Gloeckler. “We doubt these variations are interstellar.” Instead, the sun is probably responsible. The helium breeze must blow through the much denser solar wind, which can push the breeze around. Sunspots also affect the breeze. Ultraviolet radiation shining from sunspots ionizes the breeze and changes the way it appears to instruments like SWICS.

Above: ACE/SWICS measurements of the helium stream. Peaks denote annual passages through the focusing cone. Click on the image to see the complete 7-year data set.

“What we’re doing now,” explains Gloeckler, “is learning how solar activity affects the breeze. When we can reliably account for the sun, in detail, then we can use these measurements to diagnose interstellar space.”

What’s out there? What’s coming? The answer lies in a breeze from the stars of the 13th house.