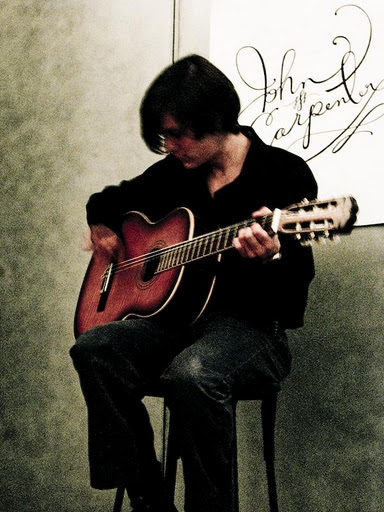 ‘Not the Old guy who makes creepy movies; this is the Young creep that maks old sounding music; this one is early Alice Cooper meets the best parts of the White Album’ ~ Deathglam

John Carpenter grew up in a cancer cluster and makes music happily compatible with films by the guy who made the name famous enough to rate a flight upgrade. He leads a three-piece band with one member named ‘J. Explosive’ and they cast three shadows pointing back at Iggy Pop, Scott Walker and Roxy Music. He used to play guitar in America’s most electrifying electric gospel band and conducts himself with the good manners and ferocious focus of an old-time fighter ace. He speaks now at the Brite Spot. This interview by Chris Ziegler.
When you were growing up in New Jersey, what were you more afraid of—the Jersey Devil, mafia hitman Richard “The Iceman” Kuklinski or the entire city of Newark?
Well there’s a fourth you’re leaving out, and that’s the water supply. Remember the cancer cluster of ’94-’95? A lot of people were getting cancer—supposedly from the tap water. Turns out the medical waste processors—the people who take all your dirty syringes—were supposed to care of it but they ended up dumping it in the drinking water. There was a made-for-TV movie about it.
So is it fair to say you were raised on toxic waste?
You could say that—that’s why I’m so small. I’m a late bloomer. I always wondered why that was.

What’s the latest-blooming thing about you? What took you the longest to figure out? 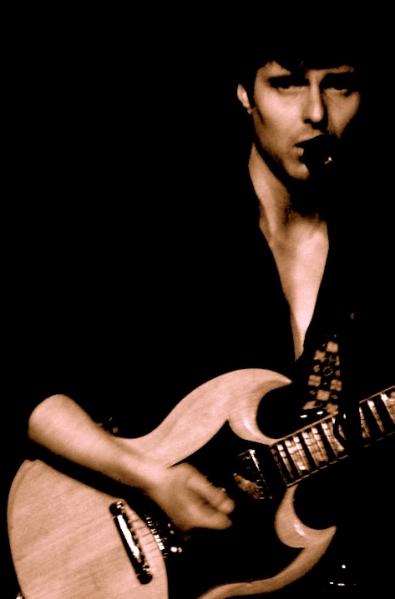 It’s never lost. Everything is like a pitch to the next person. You listen to music and you’re very deeply touched by someone’s music and that’s inevitably gonna come out in what you do. And you take it and you put it through your own grinder and in that way people move on through other people. That’s how memories are passed—that’s how ideas are passed. It’s how information was passed along for a long time. You’ve got to make people understand as much as possible while you’re still around.
What are you trying to make them understand?
I don’t know I have anything to say necessarily. I just want to make people happy. Why do people make anything? It seems kind of silly to try to sell your feelings. You can almost think it down to nothing. You can reason it away. Why make anything? Are you trying to tap into something in yourself? That’s an adventure unto itself. To say that you’re doing something big and heavy with art is to say that people who don’t do art don’t do anything heavy—which is bullshit. Everybody finds what they’re after—that window to something in their own way. Like we were talking about in the beginning. Some people drink themselves to death and some people put all their energy into their children. Some people play guitar.

What’s something thing that scares you and excites you at the same time?
I’m not scared right now. I’m going through a period where I’m very focused. I have another 20 or 25 songs that I’ve gotta get ready to record. I just want to keep it going cuz you never know what’s gonna happen. Keeping a band together is such a delicate thing. I’ve been through a million bass players and key players and drummers and then Joe A.—J. Explosive and I—hooked up in 2005 and he stuck. If you’re looking for a band, you’re the songwriter and you can probably sing your songs—so don’t go looking for a singer! Start doing your tunes and book shows. Do shows alone. Eventually, like a piano player will come out of the woodwork. Then you find a drummer and the three of you start playing. Sometimes you get it together or somebody leaves—it moves around like that and then you’re back to not having anybody again. That’s happened to me many times in my life and it’s been a delicate balance. We’re the best version of the band right now. Jeff Phillips on bass—the toughest, coolest bass player we’ve had. If you actually stop doing it then you didn’t want it to begin with. Everybody wants different things out of it but I don’t think it’s any reason to quit. Because the songs are the songs—you learn more if you just keep playing. There’s always gonna be ups and downs—it’s never gonna end. Look at the Beatles—how long did they last? Eight years? Nothing lasts. That’s why you put out different albums because sometimes you’re in a slump. Then you get a piano player and you get to write new songs just with that arrangement—it challenges you to write different kinds of music. In that way it should be encouraging enough. It should be exciting enough for people who want to write music. I’m not saying it doesn’t suck. It’s very discouraging. It seems like things take forever—but I guess if time is urgent, things do take forever.
Have you ever thought about booking a show with Abe Vigoda just to screw with people?
I would do it in a second, and we should get Rainer Maria too.

Did you really get a flight upgrade just for being named John Carpenter?
I did. I was coming back from Jamaica with some friends of mine who got married—they asked me to play some songs and I’d never been to Jamaica. There was a wretched delay and I got called to the front. The lady was like, ‘Mr. Carpenter, we have an upgrade for you.’ And looked at me like she knew.

Another Story on John Carpenter including more Music