Pigs are diligent, compassionate, and generous. They have great concentration: once they set a goal, they will devote all their energy to achieving it. Though Pigs rarely seek help from others, they will not refuse to give others a hand. Pigs never suspect trickery, so they are easily fooled.

General speaking, Pigs are relatively calm when facing trouble. No matter how difficult the problems are Pigs encounter, they can handle things properly and carefully. They have a great sense of responsibility to finish what they are engaged in. cont reading at China Highlights >>

Pig is not thought to be a smart animal in China. It likes sleeping and eating and becomes fat. Thus it usually features laziness and clumsiness. On the positive side, it behaves itself, has no plan to harm others, and can bring affluence to people. Consequently, it has been regarded as wealth.

The atmosphere is festive and relaxation widespread. It is important, however, not to be numb by the promises of this happy and promising wind. On a personal level, well-considered actions shall be rewarded much more than risk-taking during the Year of the Pig 2019.

With the feeling of abundance and lightness that reign throughout the Year of the Earth Pig 2019, a lack of attention in the management of your budget, or even money losses are possible. However, the dominant presence of the Earth element under its Yin polarity, which is the main Chinese element of the 2019 Chinese Lunar Year, has the effect of stabilizing and fixing the often joyous and ephemeral year-long energies which are specific to a Year of the Pig.  cont reading

The Following via Travel China – links with ‘types’ 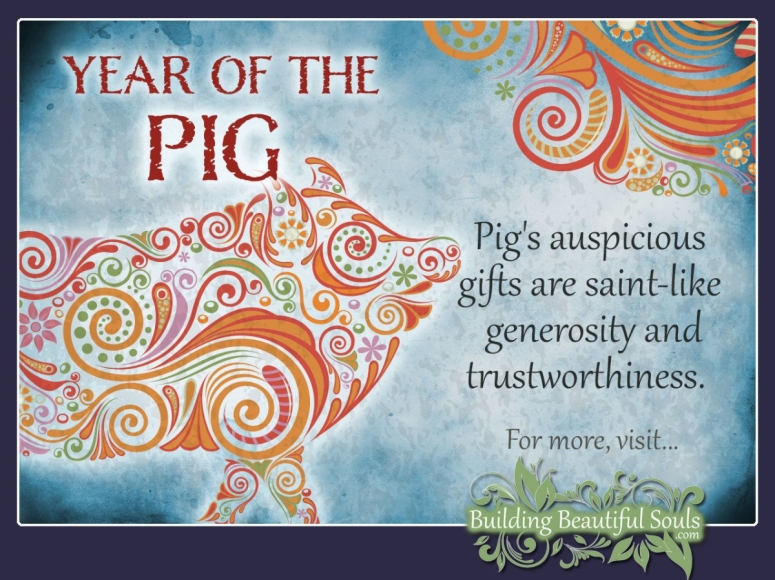